We introduce the most colorful planeteer in the Solar System in CAPTAIN FUTURE – America’s newest most scintillating scientifiction magazine. Here, for the first time in fantasy’s history, is a publication devoted exclusive to book-length novel featuring the explots of the greatest space-farer of all time! Get your copy of CAPTAIN FUTURE today AT YOUR FAVORITE NEWSSTAND – and please write and the us how you like it. Thanks! — THE EDITOR 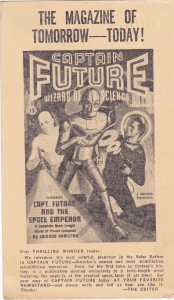 MAGAZINE HAS EXCELLENT FORMAT AND DEPARTMENTS!

(SPECIAL TO FN) Time and time again fans have asked the different Publishing Companies to publish a stf magazine devote entirely to a single character on the lines of THE SHADOW amd [i.e. and] others. A letter asking for this resulted in Jim Blish puting [i.e. putting?] out THE PLANETEER MAGAZINE, but as far as the professional magazine went the nearest they came to it was when FLASH GORDON MAGAZINE came out, but this was not a true stf magazine. BUT NOW comes the good news that STANDARD PUBLICATIONS, publishers of THRILLING WONDER STORIES, STARTLING STORIES and STRANGE STORIES are going to put out such a magazine.

The name of this, the latest stf magazine, will be CAPTAIN FUTURE & will contain a complete novel, in every issue, about CAPTAIN FUTURE. It is a regular size pulp magazine contain 198 pages and sell for 15 cent a copy. At first it will be published quarterly, but if it sells good, and we see no reason why it should not, it will become a bi-monthly & if the sales are very good, a monthly. The cover, a good one, is by Rozen, a new comer as far as stf goes, but a good artist who has done covers for ARGOSY and was at one time, cover artist for THE SHADOW MAGAZINE. The first CAPTAIN FUTURE novel entitled CAPTAIN FUTURE AND THE SPACE EMPEROR is illustrated by H W Wesso, and marvelous illustrations they are. Morey and Paul illustrate the other yarns in the first issue.

The main characters in the novel are, of course, our main hero CAPTAIN FUTURE himself, the Man of Tomorrow or the “Tarzan# of stf., his aids: GRAG, the metal robot; OTHO, the synthetic android; and SIMON WRIGHT, the living Brain. An unbeatable combination. The novels of CAPTAIN FUTURE, by the way, are written by EDMOND HAMILTON. There is also CAPTAIN FUTURE’s space ship, the COMET.

The format of this new magazine is super excellent and the departments very good and interesting. They are titled THE WORLD OF TOMORROW, THE FUTUREMEN, UNDER OBSERVATION, and THE MARCH OF SCIENCE. No doubt a readers’ column will be included in future issues.

Other yarns in the first issue are by Eric Frank Russell and O. Sarri. There is also a serial, THE HUMAN TERMITES by Dr. David H Keller.

We believe this magazine will be a big hit and a bi-monthly, if not a monthly before the year is out (1940). It is a type of magazine long wanted by the stf fans.

With this magazine, STANDARD takes the lead as the publisher of the largest number of stf magazines, WONDER, STARTLING and now CAPTAIN FUTURE.