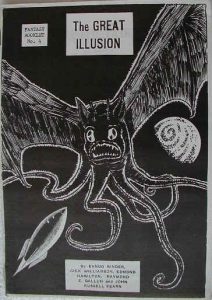 What’s It Like Out There? and Other Stories
New York : Ace Books, 1974. –
320 p. ; 18 cm. – (Ace Book ; 88065) NUC: 78-64696
007 What’s It Like Out There?
033 The King of Shadows
057  Castaway
066 Serpent Princess
097 The Stars, My Brothers
144 Dreamer’s World
184 Twilight of the Gods
227 Sunfire!
245 The Inn Outside the World
262 The Watcher of the Ages
280 Transuranic
304 The Isle of the Sleeper
“12 classics by one of science fiction’s most distinguished authors” — Cover
What’s it Like Out There?
is a collection of the best stories from Edmond Hamilton’s remarkable 40 year career of writing Science Fiction. Featuring:
The Stars, My Brother – where a scientist awakened from a century-long slumber in the depths of space had to make a choice between his own people and an alien race.
What’s It Like out There? – when Haddon returned from the expedition to Mars, everyone wanted t know what it was like … he could never let them know.
Twilight of the Gods – myth changed to reality around a man who sought to answer the mystery of his lost identity.
And many more …
Book Reviews:

Starwolf
Cover illustration by Eddie Jones
Publisher: Hamlyn : London, July 1985
Pagination: 464 p. ; cm.
Series: Venture Science Fiction ; 5 (940030-8)
ISBN: 0099400308
Note: Paperback ￡2.50
The only mercy a Starwolf could expect was death…
Morgan Chane was a Starwolf – a member of the most infamous band of interstellar pirates in the galaxy. He had flown with the raiding packs, rockets screaming, to plunder the rich and slaughter the helpless.
But Morgan Chane was also a Terran, adopted as a child into the Starwolf clan. And when a quarrel erupted, Chane discovered that the Starwolves weighed his alien birth more heavily than all the years of comradeship. Now he is cast out of the clan – and running for his life.
But where, in all the galaxy, can a Starwolf expect to find refuge?